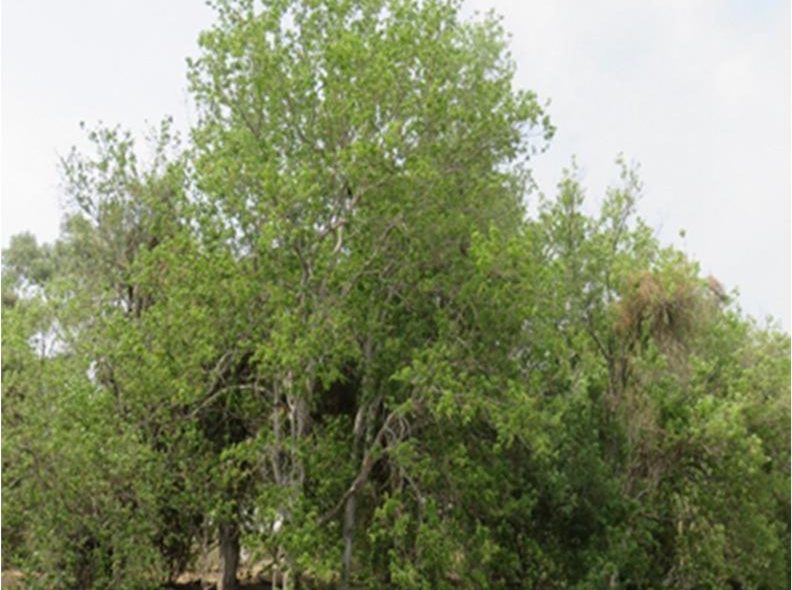 The tree Croton megalobotrys Müll.Arg. is in the family Euphorbiaceae. The scientific generic name Croton is derived from a Greek word ‘kroton’ which means ‘tick’, referring to the insect-like bloodsucking parasites, who’s shape is similar to the seed of this genus. The specific name megalobotrys is derived from Greek words meaning ‘large cluster’ in reference to the big fruits which are often held in bunches. The English common names for these trees are: Feverberry, or Large Feverberry; while in Setswana it is called Motsebe.

Croton megalobotrys is a tree with a conical to rounded, spreading crown,growing up to 15 metres tall. The bark is pale grey; when young smooth with vertical lines of lenticels, becoming rough and fissured in older trees. The leaves are simple, serrated, ovate with three veins visible from the heart-shaped base of the leaf. The roughly triangular leaves have silvery green hairs on the surface. The flowers spikes have both sexes, with the male flowers (the pollen bearing anther on the stamen) below the female flower (with stigma and style leading to the ovary). On the same spike male flowers have been observed as opening at a different time to the female flowers. The fruit is a rounded to ellipsoid drupe covered also with whitish short hairs, the yellowish brown mature fruit contains two or three seeds. Croton megalobotrys has been recorded in Botswana, Zimbabwe, Zambia, Malawi, South Africa, Mozambique and Namibia. It is common in semi deciduous savannah, at medium to low altitudes on alluvial soils and usually a constituent of riverine and swamp fringe forest or thicket.

This tree attracts birds as they eat the insects who come for the faintly sweet smelling flowers. However, the new leaves are often ravaged by caterpillars (which are eaten by several species of cuckoo) and the powder, that is a byproduct of this chomping, is irritating causing people who live near Motsebe trees to sneeze and cough. The trees quickly produce another set of leaves after such an attack,this has been observed to happen twice in a season. Wild game animals, elephants and kudu also eat the leaves while Red-eyed doves manage to swallow the seeds whole! Our tree squirrels are also fond of the seeds, they chew the green pericarp to extract the whole seeds which they then carry back to their nests for meals at some later time.

Medicinally, the bark and the seeds of this tree were used as a purgative and used to treat fever, especially malaria, but beware! ‘In human beings, administration of C. megalobotrys bark causes intense burning sensation in the throat, salivation and slight nausea with slight laxative effect. The toxicity effects of C. megalobotrys are attributed to diterpenes which are characteristic of most species belonging to the Croton genus’. In vitro tests of extracts from C. megalobotrys bark produced a significant suppressive anti-plasmodial (anti-malaria) effect. So, in fact, the tree is slightly misnamed as ‘Feverberry’ as the bark was actually the more effective ingredient of the cure. Historically bark and seeds have been reported as a fish poison.

Croton megalobotrys has been tested as a potential biofuel, the seeds produce oil in competition with the more widely known biofuel candidate Jatropha curcas, from the same family Euphorbiaceae. Jatropha curcas is not indigenous to Africa and is a potentially invasive species. Whereas Africa has many indigenous Croton species. In Kenya, for example, Jatropha trials required as much as 20,000 litres of water to make one litre of biofuel. The Kenyan indigenous Croton is C. megalocarpus and the yield rate of methyl ester is 94.2%, higher than the 90.7% from Jatropha curcas.5 Croton trees are also planted as windbreaks in Kenya so their use, as a source of biofuel, may be of benefit rural economies there without competing for water and arable land.