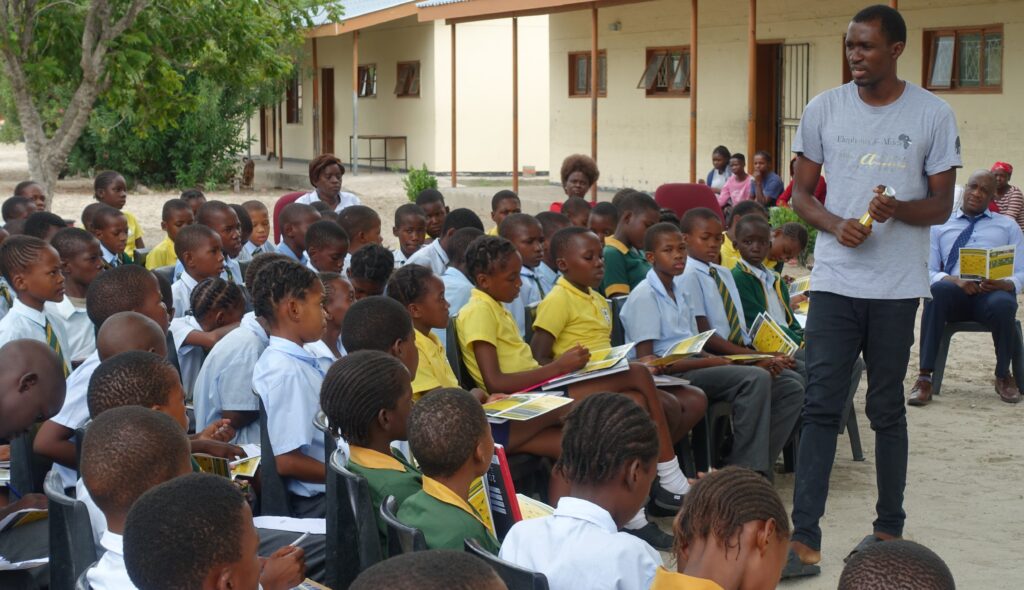 Botswana’s elephant population has increased over several decades, which has led them to significantly expanding their range. Around 78% of the elephant population is found outside protected areas and with ecological changes in the north, this number is only going to increase. Working with the affected communities is important to alleviate human-elephant conflict and to ensure the success of elephant conservation in Botswana.

Elephants for Africa (EfA) is dedicated to enhancing human-wildlife coexistence in farming communities.  The organisation conducts research to conserve the African elephant through understanding the ecological and social requirements of male African elephants and put these into the context of human-wildlife conflict. Elephants for Africa is working in Botswana with local and international researchers to deliver scientific data to local decision-makers and it runs education programmes that focus on developing the conservation leaders of the future and empowering local communities.

The organisation hosts ‘Living with’ workshops that give communities access to information about elephants such as:

With funding from Travel for Impact, Elephants for Africa (EfA) was able to initiate a three day ‘Living with Elephants’ workshop in Motopi. Motopi is a small community located about 10km from the north-western corner of the Makgadikgadi Pans National Park. Due to its distance to the national park, Motopi is not considered a prime wildlife-conflict area.  However, as most national parks and wildlife reserves in Botswana are unfenced, animals freely move across community land far from park boundaries. Like other communities in Botswana, Motopi has seen a rapid increase in elephant numbers over the past 10 years, with elephants now posing a real threat to the security and sustainability of the livelihoods of many community members. In contrast to communities directly adjacent to national parks, these communities do not gain any benefits from the tourism industry, but nevertheless carry the burden of dealing with potentially dangerous animals, leading to a rise in resentment towards wildlife.

EfA has developed a workshop to provide:

Overall, the workshop aims to provide a deeper understanding on elephant behaviour and inform communities how best to behave in conflict situations.

Over 100 community members were reached with the ‘Living with Elephants’ workshops held in Motopi. More than 75 community members participated in the Kgotla meeting, and 29 farmers were counted during the workshop at the cattle post Ramoxhiki. Several participants, who had been chosen at random, filled out a post-workshop questionnaire, answering questions regarding their previous experience with elephants and how the workshop has improved their knowledge on elephant behaviour. All participants had encountered an elephant in the wild, but only 50% thought they knew how to respond during such an encounter. As little as 10% of the participants knew the signs of a relaxed and resting elephant (rising to 100% after the workshop). None of the participants could identify a scared or angry elephant before the workshop, while 80% to 90% were able to do so after the workshop. This increase in the knowledge of an elephant’s behaviour is important to make sure community members know how to adequately respond when encountering an elephant so as not to worsen a potentially dangerous situation.

The community of Motopi was thrilled with these workshops and the positive impact they will have on their lives.  “Many community members have heard and believed myths about elephant behaviour, some of which are completely wrong and could potentially put their lives in danger. Getting clarification on some of these things is important and we hope that they are now in a better position to stay safe when moving around in the bush,” said Mr Kenewendo, the Kgosi of Motopi. Another participant from the workshop was Mr Joel who is a teacher at the Primary school, “With some of us having never encountered elephants before coming to Motopi, it is hard to advise students on how to best keep themselves safe. Although we are still a bit afraid of them, we now know enough to not run away at first sight! These kinds of workshops are important for as long as people interact with elephants, thinking that they know how to behave properly, but rarely know, they can endanger their lives”.

We thank Elephants for Africa for hosting these workshops and are delighted we are able to support them.

Mokgalo is one of the Setswana names for Ziziphus mucronata Willd. subsp. mucronata in the Family Rhamnaceae. The family ...