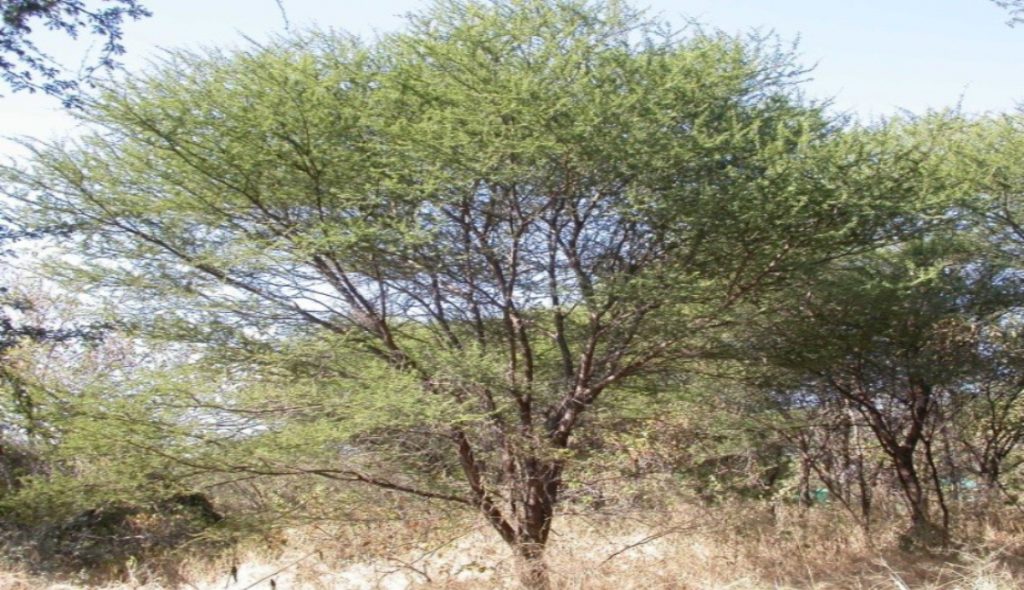 An Acacia by any other name?

In 2011, at the International Botanical Congress in Australia, it was decided (based on new DNA evidence) to split the Acacia genus into several different genera, each of which are monophyletic. Since Australia has by far the most species in the old genus the name Acacia is now reserved for their wattles, which is why there are no longer any indigenous Acacia trees in Botswana! 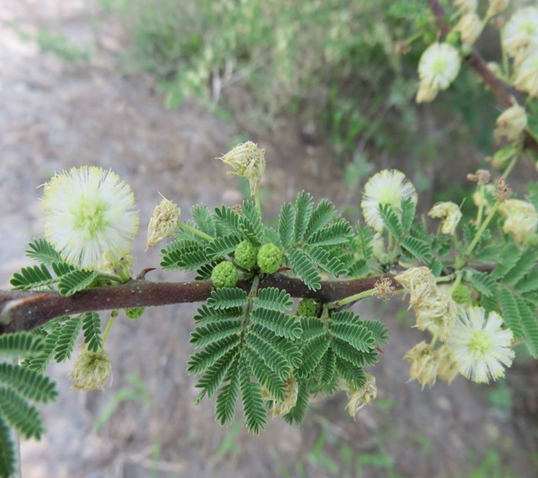 The classic umbrella thorn is an archetype of Botswana landscape. It is Vachellia tortilis (Forssk.) Gallaso & Banfi commonly called Mosu in Setswana and was previously called Acacia tortilis. The genus name Vachellia is in honour of George Harvey Vachell (1789 – 1839) who was chaplain to the British East India’s Company factory in Macao, China.  He arrived in China in 1828 and remained resident in Macau until 1836, bar a leave of absence in 1832. In his spare time he collected plants in the vicinity, discovering a number of new taxa. The specific name tortilis comes from Latin and means twisted (tortured) and refers to the shape of the seedpod.

The elegant Mosu usually reaches a height of between 4 to 8m but it can reach 20m. The crown is dense, umbrella-like and flat-topped. Leaves are compound and the leaflets are very small often blue-green. The bark on the trunk is rough and varies from medium grey to almost black, with longitudinal fissures. The tree is armed with a mixture of long, straight, slender thorns and short, hooked thorns; paired at nodes.  Straight and hooked thorn pairs usually alternate at consecutive nodes, but a pair may comprise one hooked and one straight thorn. The flowers are white, cream or yellow, and highly aromatic, clustered in round balls in leaf axils. They usually appear about midsummer but have been observed as late as February. 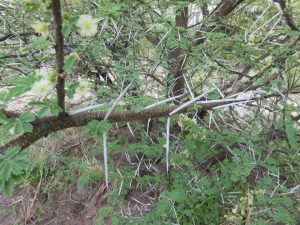 The fruit is a characteristic twisted brownish pod which may be either are rolled up into a tight circle or wound into a helix of three or four turns, like a coil spring. They are longitudinally veined, somewhat woody, and usually glabrous and dry out to a light khaki colour. They occur in bunches and are indehiscent (not opening when ripe). Pods contain up to 14 seeds, some of which often do not mature. The seeds are greenish brown with a dark brown horseshoe-pattern; they are an almost circular, small flattened pill shape. 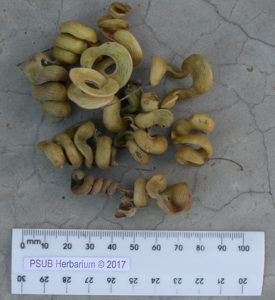 Where does it grow? The umbrella thorn is common and widespread in Botswana. It may occur on clay or loam soils in a variety of types of woodland, generally near floodplains and pans. It also grows well on alkaline sandy or rocky soils. It is tolerant of severe drought as it a phreatophyte meaning that the plant’s roots are long can draw on deep aquifers. It tolerates strong salinity and short duration seasonal waterlogging. Mosu withstands wide temperature variations from Celsius subzero to mid-40s.

Vachellia tortilis has positive environmental impact as it is Nitrogen fixing species and thus a soil improver. It is used in erosion control since it is able to grow quickly and stabilize shifting sand dunes or hillslopes.  Around the edges of the Okavango delta you may still see swathes of dead trees which include many V. tortilis, this is because of they were drowned by the prolonged high water flood levels of 2011-2012.  The flood water has reclaimed these flood plains back to forb, grass and sedge species.

What is Mosu used by or for?

Galago (scientific name) aka Bush babies (English common name) or Nagapies (Afrikaans common name) or Mogwele (in Setswana) love the gum Mosu exudes. They will frequent the trees on a regular basis especially if fresh water is also available for a drink after their gooey snack.

The timber is used for fence posts, firewood and furniture. The pods and leaves are highly nutritious and are browsed by game and livestock. Gum is edible. The thorny branches are used to erect temporary cages and pens for livestock control. Bark is said to be a good source of tannin. Vervet monkeys and baboons eat the young green pods whilst other animals eat will those which have fallen to the ground.

Herbarium sheet scans funded by Desert and Delta Safaris together with SLM Ngamiland as part of the data Mobilization Project of PSUB herbarium.

Text and photographs by Mmusi Mmusi,