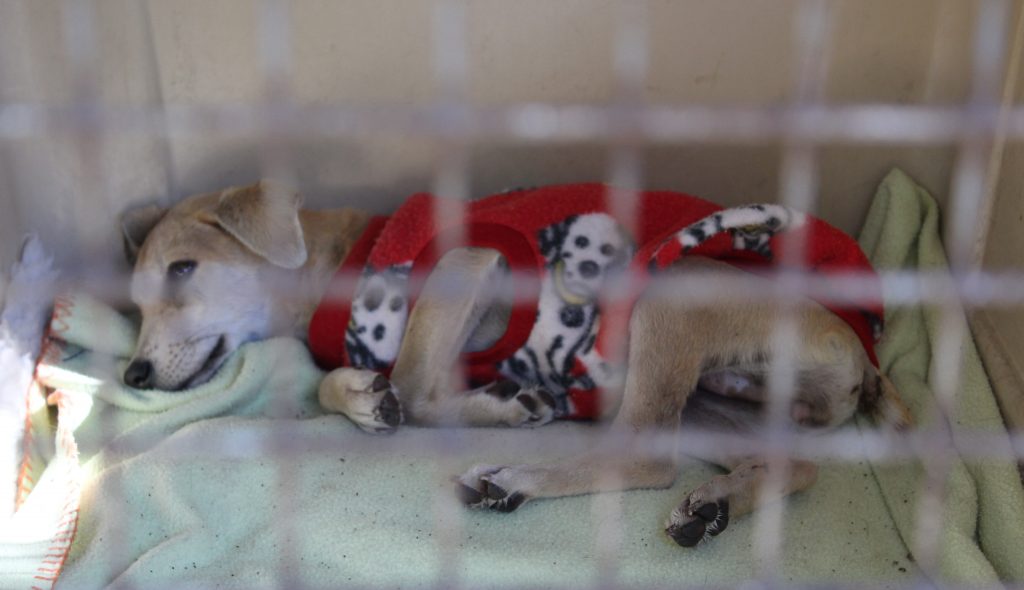 My name is Rose Tubman-Broeren and ever since I was a kid; I’ve been interested in shelter medicine and working with low-income/low-access communities. I fostered animals for the SPCA for many years and twice had the opportunity to volunteer in wildlife rescue and rehabilitation in Thailand. Shortly after graduating as an RVT in the spring of 2014, I joined the Canadian Animal Assistance Team (CAAT), and in 2015 I participated in a two-week trip to Fort St. James and Hazelton where we spayed, neutered, and vaccinated 282 dogs and cats. In 2017, I was feeling the itch again, and when CAAT opened applications for a five-week trip to Botswana, I jumped at the opportunity. 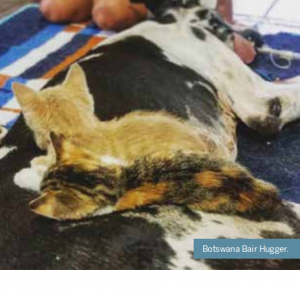 Founded in 2005, CAAT works primarily within remote and low-income communities in BC and Ontario, sending veterinary teams to sterilize and vaccinate the animals while educating community members and providing much-needed medical services. In 2011, they partnered with the Maun Animal Welfare Society (MAWS), an NGO in Botswana, and began to send veterinary teams every one to two years to assist with their spay/neuter/vaccinate program. MAWS has been active in Maun since 1998 and has been able to sterilize over 17,000 animals to date. The Society operates a small clinic with the help of volunteer veterinarians and technologists from all over the world and does frequent outreach work up and down the Okavango Delta for communities with no access to veterinary care.

I was the sole technologist for a team of up to four CAAT volunteer veterinarians; two arrived with me and remained for roughly two and a half weeks, and two more arrived two weeks into the project and remained until the end. Prior to our arrival, MAWS had been without a veterinarian for over three months, and we started working literally the day we arrived, flying into Maun around 3 pm and anesthetizing a laceration repair at 4 pm. Although our mandate was primarily spay/neuter, there were plenty of medical cases; dogs with distemper and parvo to keep on fluids and to provide nursing where possible, lacerations and wounds from dog fights and hit-by-cars, broken limbs to amputate, and of course, more tick-borne diseases than you could shake a stick at.

As a technologist, I quickly realized that not only was I required to use absolutely all my skills, but that I needed to learn on the fly and be ready to roll with the punches. Most of our surgeries had ehrlichiosis, and profuse bleeding was the norm rather than the exception; gauze swabs needed to be wrung out and reused during surgery, and I often found myself positioning kidney dishes to catch the runoff from a mature spay. Veins were universally superficial and hilariously delicate; catheter placement for the first couple of days was an exercise in frustration before I adjusted to the idea of sneaking just below the skin and accepting that everything was going to bruise. Although MAWS has two amazing assistants who could wrangle any dog and keep a straight face through the craziest days, they were often kept busy with up to 17 hospitalized patients at any given time (plus those in for sterilization), and I generally prepped animals on my own. One-handed catheters and intubations were commonplace; when I returned to my own practice after the five weeks, I almost found it uncomfortable to have someone hold off veins and hold open mouths for me. On the busiest days in Maun, I was responsible for pre-medicating, catheterizing, inducing, intubating, prepping, monitoring, and recovering all 20+ patients, something which took all my energy and occasionally left me scrambling to give meds with one hand while extubating with the other and keeping a foot on a recovering patient trying to stagger away. 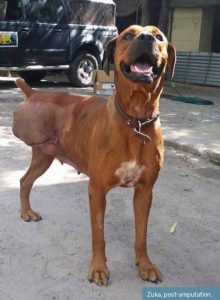 During our five weeks, the veterinarians were able to spay and neuter 279 dogs and cats. We also did outreach in three villages—Gumare, Etsha 13, and Motopi—where we were able to make a significant dent in the population of breeding animals. We amputated four limbs (two fore, two hind), one of which was gangrenous from a suspected snakebite, enucleated an eyeball destroyed in a dogfight, sutured more gaping wounds than I’ve ever seen in my life, and still had time to hand-raise a litter of kittens and an ehrlichiosis puppy. On Saturdays, we treated dogs with transmissible venereal tumours, giving IV vincristine as safely as possible without access to any real PPE except for latex gloves.

Our resources were few: most non-anesthetic drugs were donated and out-of-date, or labelled in languages none of us read. Our single pair of clippers had only two 40 blades and frequently threw tantrums about working, leaving us with disposable straight razors. Power outages were frequent enough that the veterinarians wore headlamps. Syringes and needles were expensive and hard to come by, so they were reused whenever possible, with a single syringe/needle assigned to a specific drug per day. On outreach, we would set up our tables under trees for shade, which had the unfortunate side effect of having to try and protect open abdomens from falling leaves, sticks—and on one memorable occasion, bird feces. Whipping wind would send drapes flying unless weighted with towel clamps, and between drawing up drugs, prepping, monitoring, and recovering our patients, I would need to chase down runaway sutures and instruments.

Despite all this, I don’t think I’ve ever been happier at work. Our team worked like a well-oiled machine, slamming through upwards of 20 surgeries per day and still having time to explore Maun and bond over nightly braais. We laughed and cried together and kept each other strong through long days and longer nights, good cases and bad. We marvelled at the incredible stoicism and resilience of the Africanis breed, watching as our amputees ate and ambulated willingly within hours of surgery. We shared joyful moments with thankful owners as their pets recovered and returned home, and we shared their pain when there was nothing we could do but allow their pets the peace of euthanasia.

I learned a huge amount, not just about my capabilities as a technologist, but also about who I was as a person. I feel so lucky to have been able to spend those five weeks with MAWS and represent British Columbia’s veterinary technologists, and I can’t wait until the day I can return! 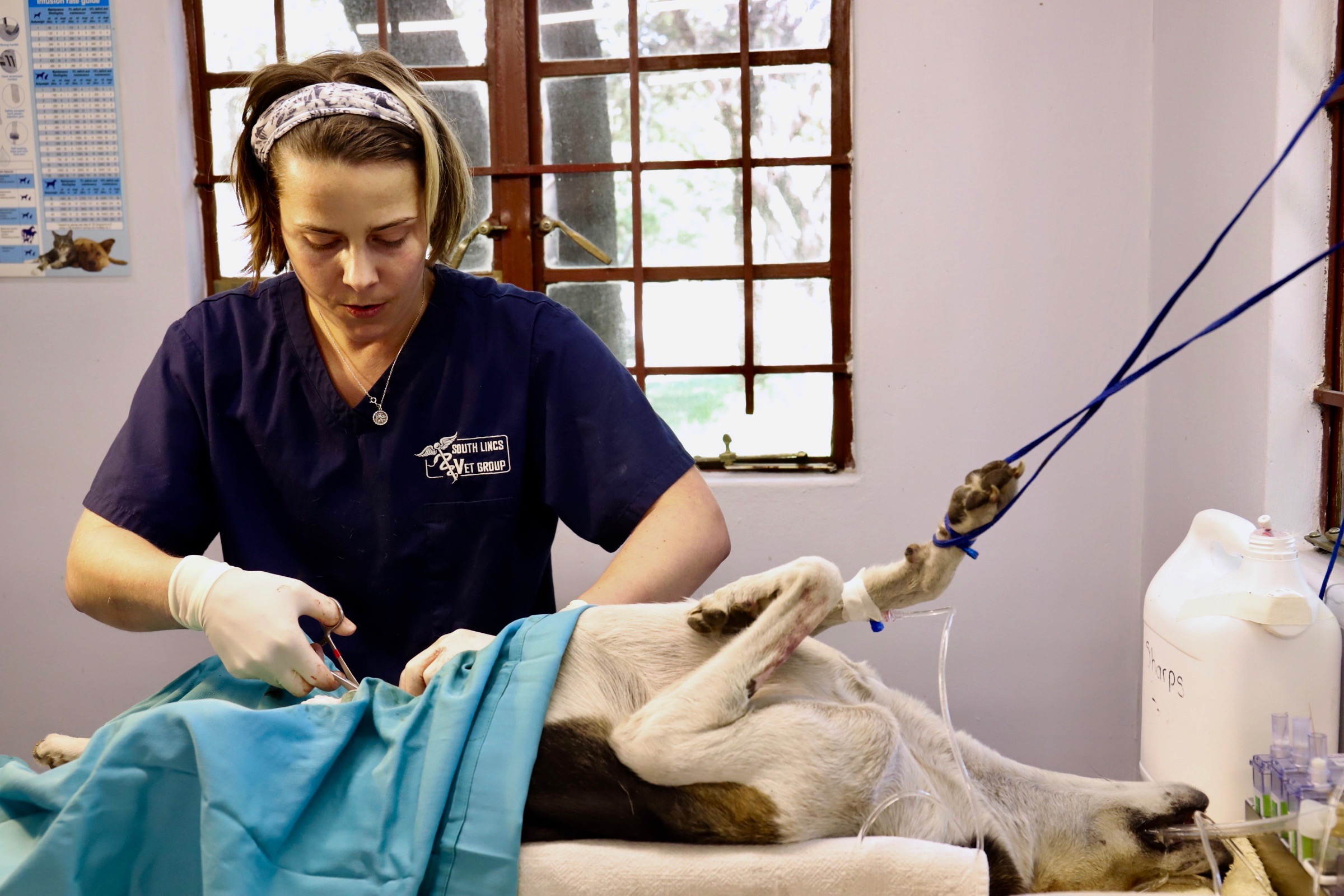 Maun Animal Welfare Society, better known as MAWS, is one of Travel for Impact’s proud partners. They are operated ... 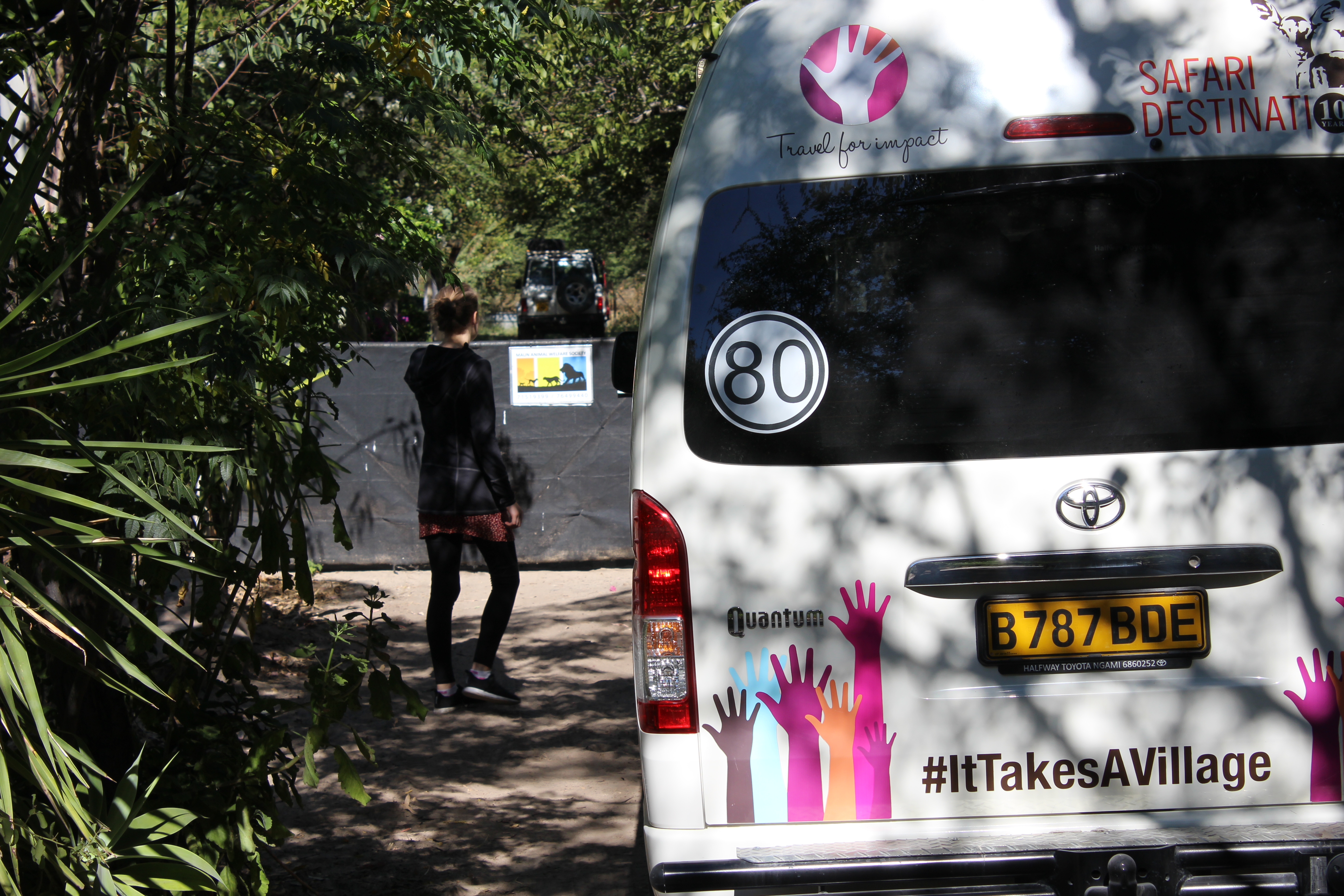 MAWS Mobile Outreach: ‘They are doing it all out of love’

“Come through and meet John and Helen,” Tana, MAWS co-founder, says as we walk through the clinic door. ...